Belonging to a third generation of Butoh artists, Yumiko has developed a personal style of bodywork called Body Resonance, which integrates Butoh practice with features of Noguchi Taiso gymnastics and various other Asian training methods to help prepare the body to receive and transmit dance and inspirations.

Bob Lyness from Hawaii will host a class especially for those in that part of the world!
5:00 – 6:30pm Hawaii time
10:00-11:00pm Chicago time
Register here or contact : Bob Lynness @rhb11@hotmail.com

Yumiko’s words: “Body Resonance starts from the idea that the world, including our body and soul, consists of vibrational waves that create constant resonances like echoes. When we tune our body to that frequency, we receive images, feelings and sensations accordingly. For this to happen, we need first to shake off unnecessary tension. In effect, we make a white canvas of our body to paint new colour on it. I teach this as neutralization, encouraging a close-to-zero state, scouring off rust and polishing antenna to catch waves from profound layers of the body. The transformations and concentrations of dancing break up the eggshell of form. They melt down the armour of our ego, allowing resonant memories to emerge from our cells that are floating in the primal liquid of time.”

Yumiko Yoshioka: dancer, choreographer, teacher, art director is a Japanese Butoh dancer and choreographer originally from Tokyo. Since 1988 she has been based in Berlin. Yumiko was a former member of Ariadone in 1974, the first female Butoh company, founded by Carlotta Ikeda and Ko Murobushi. In 1978, she performed with Carlotta and Ko in Paris ”Le Dernier Eden- Porte de L’Au-Dela,“ the very first Butoh performance to be presented in a public theatre outside Japan. In 1988 she founded tatoeba THÉÂTRE DANCE GROTESQUE with Minako Seki and delta RA’i in Berlin (1988–1996). Between 1995–2015 she was a core member of TEN PEN CHii art labor, an interdisciplinary and experimental art formation, as a dancer and a choreographer along with JoaXhim Manger (visual artist) and Zam Johnson (composer and musician). Since 1995 she has also set up various collaborative projects across Europe such as  “eX…it!, Dance eXchange Festival” at Schloss Bröllin in Germany, dance projects with Gest-Azione, with Annalisa Maggiani from Italy, and dance creations with Rena Konstantaki from Greece. Many other collaborations with international artists and dancers encouraged Yumiko to unfold her own personal style of dancing and choreography. www.yumiko-yoshioka.com

Based on the assumptions of various cultural traditions and neuroscience, this workshop aims at awakening old trans-generational memories buried in our bodies and let our bodies narrate it with its own gestures. Our focus lies hereby on our center, the enteric nervous system controlling our bowels, which acts like our brains autonomously. In order to deeply connect with ourselves and our dancing partners through our collective unconscious, we employ Katsugen Undo exercises, fundamental floor work from contact improvisation, atomic shakes and other techniques.

The workshop is open to anybody who is ready to explore the whole depth of our existence. Jakob will also be performing at a ONE NIGHT ONLY event March 3 at Elastic Arts, Chicago, Yelling at the Dark!

One of the major developments in contemporary dance in the latter half of the 20th century, Butoh combines dance, theater, improvisation and influences of Japanese traditional performing arts to create a unique performing art form that is both controversial and universal in its expression. According to CLAUDIA LA ROCCO in the New York Times, “People tend to think of Butoh in terms of aesthetic markers: white body paint, shaved heads, slow movement gained through intense muscular control, and a way of manipulating the body that is at once beautiful and grotesque, tragic and absurd. Influenced by German Expressionism, it tends to be imagistic rather than narrative. But while these elements often appear, defining Butoh in stylistic terms is dangerous…Butoh is no one thing, but it always has, at its center, a fragile transformative spark. You can’t always describe it, but you know it when you see it, and you know when it’s missing.” 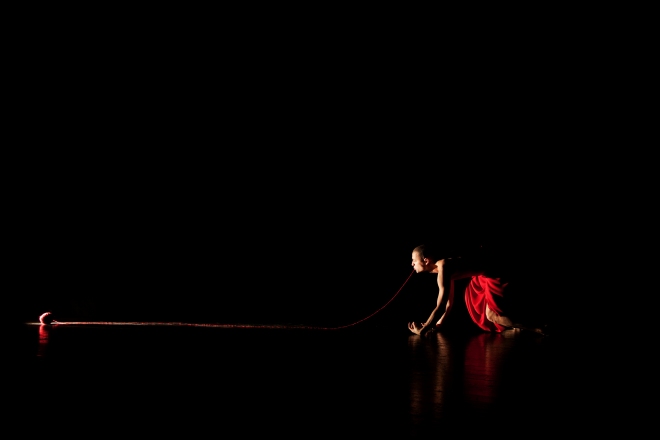 SSII is curated and organized by Sara Zalek, butoh dancer, choreographer and teacher. In April 2014, Zalek curated Spawned Seeds: A Post Butoh Festival, in December Vangeline Theater, and hosts Tadashi Endo at The Old Town School of Folk Music in June. The artists she curates are internationally or locally renowned for their innovative use of butoh in performance. “There is a growing interest in Butoh–the invocation of transformation and the mystery of the live moment. Experiencing Butoh first hand is the best way to understand how and why Butoh is thriving now.”

This year’s Summit will explore the theme “Improvisation and Innovation”. In the spirit of this, the creative leadership of The Second City, the Chicago improve comedy giants will present lessons from their book Yes, And about improving creativity and collaboration. Lake FX Summit + Expo is a FREE event and open to anyone interested in the creative industries. Free registration will be begin in early March. The event is presented by Google, organized by the Chicago Department of Cultural Affairs and Special Events and co-produced by CIMMfest and The Recording Academy® Chicago Chapter. Event sponsors include Chicago Sun-Times, Chicago Reader and Splash; Virgin Hotel Chicago, and many more.

“Chicago’s creative community is one of this city’s greatest assets,” says DCASE Commissioner Michelle Boone. “We’re always looking for new opportunities to support their efforts and industries and to leverage their expertise.”

For more information about the Summit, visit LakeFXChicago.org.

Vangeline alights here tonight! Oh, so excited, truly! For three years in a row, Vangeline has braved the Chicago cold and led us in excruciating and exhilarating training, bringing us closer to ourselves and to each other. We still have space in the evening workshops on Wednesday and Thursday, meaning you should totally come! Consider it a present to yourself ❤